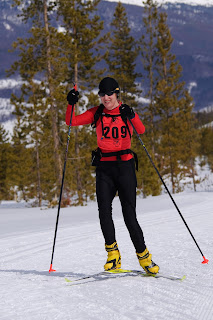 ...but, it's really a race. We headed up to Frisco to get Judy's race legs back before the Alpina SMR Stampede in late February. The Frisco race is the last of a series of 4 races. Each lap is approximately 10k. Racers can do 10, 20 or 30k and were timed accordingly. Judy decided to do 20k, as the elevation being over 9000 ft amsl, would take a toll on here recovery in time for late Feb. My job was to ski with Bryce and photo racers. I got tons of photos and posted them to my website: http://dejansmaic.smugmug.com/gallery/7362448_abxAA/1/475021237_kDW6i
Bryce napped, skied and eventually played in the white stuff. Judy finished 20k, and said it was tough considering it's her first race of the season combined with the length & steepness of the course at over 9000'.
Posted by Dejan Smaic at 04:35 No comments: Links to this post

February 11, 2009 - There was a snowfall the night before, leaving slick & icy roads, but a very scenic drive for the morning commute. I was on my way in to work, slipping and a sliding, and decided to take a few hours of my vacation time to catch this rare opportunity of "snow along the front range" on my Nikon. Several inches of "fluff" coupled with low angle sunlight & cold morning temps was just too tempting. So, I decided to head up to Chautauqua Park in Boulder to get a few shots of the Flatirons with fresh powder before the days rays does the melt off. Later that afternoon, I did a trail run at Chautauqua and noticed the fresh snow could not win against the suns warming rays. As a tribute to Boulder, which recently celebrated its 150th yr anniversary, I post processed in CS3 and Efex Pro to give this shot a sepia effect. I am not sure if Mork and Mindy have been to Boulder recently, but I think they'd still find it a great place to live...if they can afford the hyper inflated property values. 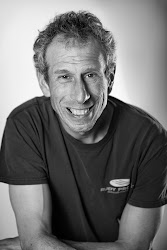